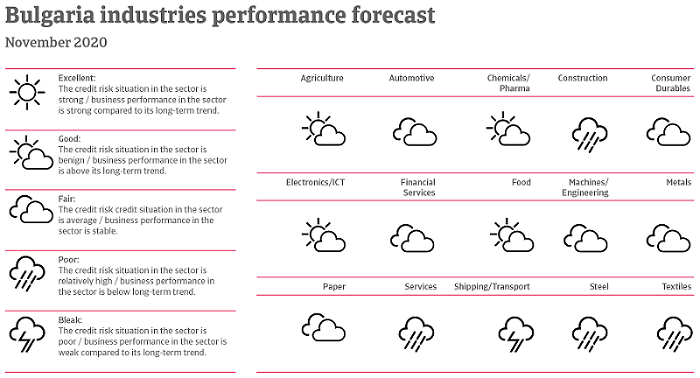 After the snap elections held in March 2017, Boyko Borisov from the centre-right GERB party became Prime Minister for the third time. He heads a coalition government of GERB and the nationalist “United Patriots” party, with just a slim majority in parliament (122 of 240 seats). While the incumbent government pursues a pro-EU policy, the Bulgarian Socialist Party (BSP), the largest opposition party, and President Radev favour closer political and economic relations with Russia.

Political uncertainty has increased further since July 2020, due to regular street protests and demonstrations against the government. Those protests are mainly aimed against corruption and nepotism, triggered by a series of political and graft scandals in the first half of 2020. So far, the government has refused to resign.

The recession triggered by the coronavirus pandemic reached its preliminary peak in Q2 of 2020, when GDP contracted 10% quarter-on-quarter. Bulgaria’s economy is expected to contract 4.3% in 2020, mainly due to deterioration of real fixed investment (down more than 8%), exports (down more than 10%) and industrial production (down almost 5%).

Tourism (usually generating 11% of GDP) is among the hardest hit sectors by the pandemic, with tourist arrivals in August 2020 more than two-thirds lower than in August 2019.

Government consumption is expected to increase 5% in 2020, due to extra expenditures made in order to counter the negative effects of the pandemic. The government announced measures such as partial compensation for wage costs and social security contributions, VAT reductions, tax deferrals and other financial support to vulnerable companies. Support is also provided to the health sector, the tourism industry, freelancers, pensioners and parents.

Additionally, the Central Bank has added more liquidity to the banking sector, created the option for a temporary debt moratorium and provided additional credits and guarantees to small- and medium-sized enterprises.

It is currently expected that GDP will rebound by almost 4% in 2021, with exports and investments increasing about 7% and 13% respectively. Inflation is expected to remain below 2%. However, the recovery largely depends on the impact and duration of the ongoing “second wave” of the pandemic in Bulgaria and Europe.

Bulgaria’s monetary policy framework is strong, with a solid commitment to its currency board arrangement (the lev has been pegged to the euro since 1997). As a result, the Bulgarian Central Bank usually follows monetary policy decisions made by the European Central Bank. Although Bulgaria entered the Exchange Rate Mechanism II of the EU in June 2020, an adoption of the euro seems rather unlikely in the short run.

While the currency peg supports foreign investor confidence, it somehow limits Bulgaria’s ability to combat external imbalances. The peg is maintainable due to sufficient international reserves (more than eleven months of import cover in 2020) and current account surpluses. While this surplus will decrease to about 1.5% of GDP in 2020, an increase to more than 3% is expected in 2021 as a result of a rebound in tourism and a rise in EU grants.

Fiscal discipline required to maintain the currency board has thus far kept government debt sustainable. In 2020 the fiscal deficit is expected to increase to about 3% of GDP, resulting in a rise of government debt by more than 5 percentage points, to 26% of GDP. In 2021 the fiscal deficit will likely decrease to about 2% of GDP, with government debt increasing modestly to 27% of GDP. While the share of public debt held by non-resident creditors and denominated in foreign currency (about 80%) is high, the large liquidity buffer of the government (about 12% of GDP) and the EU Recovery Fund mitigate sovereign risk.

The banking sector has been recently strengthened

The Bulgarian banking sector is sufficiently capitalized and profitable, with a capital adequacy ratio of more than 22%, return on assets of almost 1%, and a net foreign creditor position. Sector risk has been additionally mitigated by Bulgaria’s entry into the EU Banking Union in October 2020 and consolidation efforts in the industry. While the non-performing loans ratio (8%) and the share of foreign-currency exposure in banks’ liabilities and loans (35-40%) are rather high, the currency board mitigates risks stemming from currency mismatches between assets and liabilities.

Despite the current account surpluses, Bulgaria has a high gross financing requirement of almost 23% of GDP in 2020. However, external funding bottlenecks are not expected, as more than two-third of the gross financing requirement concerns short-term debt that can be largely rolled over. Moreover, Bulgaria has good access to international capital markets.

Foreign debt is sustainable (57% of GDP and 83% of exports of goods and services in 2020) and expected to decrease in 2021. However, there are external arrears to private creditors amounting to more than USD 900 million. In 2020 a strong rise in international reserves (by almost 25%) and the import compression are expected to result in an increase of the import cover of those reserves from eight months in 2019 to more than eleven months in 2020. International reserves also cover short-term debt and the gross financing requirement, further supporting external liquidity. These liquidity ratios are expected to remain at reassuring levels in 2021.

Some downside risks to the economic growth potential

Political instability remains an issue for Bulgaria´s long-term economic growth prospects, while corruption and red tape still hamper the business environment. The high level of emigration (about one million Bulgarians live abroad) and a shrinking and ageing population (the United Nations expect Bulgaria’s population to decrease from 7 million to 5.2 million by 2050) add to the woes of the labour market and reduce the potential for long-term growth. Lack of skilled staff has already started to impact growth prospects of businesses.

The 2020 forecast downturn in Romania’s economy suddenly accelerated under the lockdown conditions imposed to tackle the COVID-19 pandemic.

The economic growth that Bulgaria had been enjoying last year stalled with the onset of the COVID-19 induced recession. Ongoing economic challenges are causing stress for Bulgaria-based businesses.