Despite a modest economic rebound the business performance and credit risk situation of several industries remains strained, especially in Dubai. 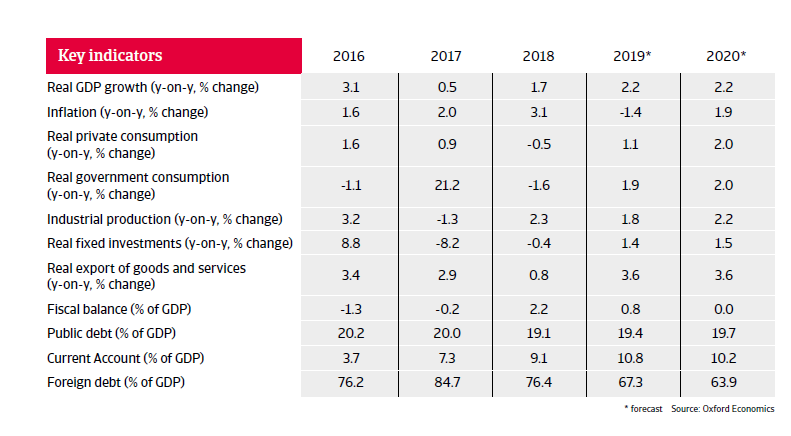 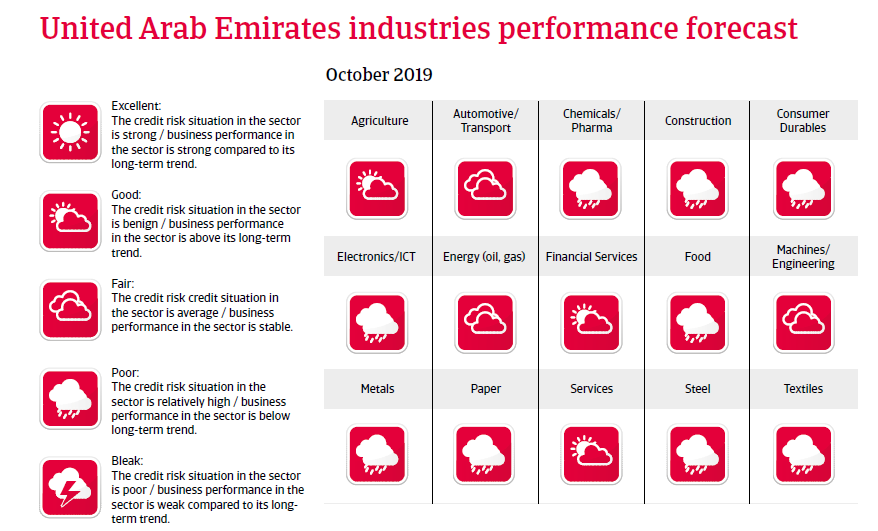 The ruling families and traditional tribal structures influence domestic politics considerably. Political parties or trade unions are not permitted and opposition is virtually non-existent. The Federal National Council (FNC) as a legislative body has only an advisory role. Political and social tensions are low, and the UAE is one of the most stable countries in an unstable region.

The UAE will maintain an assertive foreign policy in order to increase its regional influence in light of continued insecurity in the Middle East. The country is part of the alliance against the Islamic State (IS), and its armed forces are part of the campaign against Houthi rebels in Yemen, co-led with Saudi Arabia. However, the UAE has recently announced it will partly withdraw and redeploy its troops in Yemen.

To some extent, Dubai´s transhipment trade and financial services sector have been affected by the imposition of US sanctions on Iran. While a military confrontation between Iran and the US is still unlikely, the economic consequences of such a worst-case scenario could be severe for the UAE, being the region’s trade, investment and tourism centre.

A modest economic rebound, but many industries are still struggling

The modest economic rebound is expected to continue in 2019 and 2020 on the back of oil revenues. Additionally, increased infrastructure spending in the run-up to the World Expo 2020 event hosted in Dubai (increased construction spending and more tourism) should support growth.

That said, the business performance and credit risk situation of several industries remains strained, especially in Dubai. Construction, non-food and food retail, ICT, metals and steel have not yet recovered from the recent economic slump and limited access to external financing.

During the recession, lower government revenues from oil sales affected government deposits in the banking sector, leading to a curb in lending and credit growth. Due to increasing non-performing loans banks sustained their cautious lending approach in 2018, with a negative impact on various traders, stockists and distributors. Many businesses have faced liquidity/cash flow issues and either delayed payments to suppliers or even closed down their businesses. Construction, metals and steel still suffer from delays on some large value infrastructure projects. Some highly indebted construction companies remain vulnerable to tighter financial conditions and declining real estate prices.

Despite the ongoing issue of higher non-performing loans as a legacy of the economic downturn, the banking sector is well regulated and capitalized, with a capital-adequacy ratio of more than 18% at the end of 2018. While still highly exposed to the property sector (about 20% of total credit), in general, banks maintain adequate loan loss provisions, and the risks from the outstanding liabilities of Dubai´s government related entities are mitigated by tacit state guarantees. Central bank stress tests have shown that UAE banks are resilient and able to withstand severe adverse macro-financial developments.

Those measures are part of the government´s strategy to diversify the economy away from oil, boost private sector growth and to establish a knowledge-driven economy in the long-term. The aim is to increase the GDP share of non-oil sectors to 80% by 2021 (currently non-oil sectors account for 70% of the UAE´s total GDP). However, private sector diversification remains heavily reliant on expatriates (80% of the population). While the recent introduction of long-term visas will help to secure more commitment from highly qualified expatriates, the incentive for locals to choose private sector employment over the (highly paid) civil service remains low.

Government revenues will increase amid higher oil prices and after the implementation of several non-oil revenue raising measures (excise duties, VAT introduction since January 2018). While fiscal easing is underway to kick-start economic growth and accelerate economic diversification, the government is expected to resume fiscal consolidation once the recovery takes hold. The UAE can easily afford higher public spending, as long as the actual oil price is above its fiscal break-even oil price of around USD 62 per barrel. Public debt is below 20% of GDP, while the UAE can fall back on large Sovereign Wealth Funds that have an estimated total value of over USD 1.2 trillion (about 290% of GDP).

The current account will remain in surplus in 2019 and 2020, as exports continue to benefit from higher oil prices. As the dirham is pegged to the USD, the end of US monetary tightening contains domestic borrowing costs in 2019. 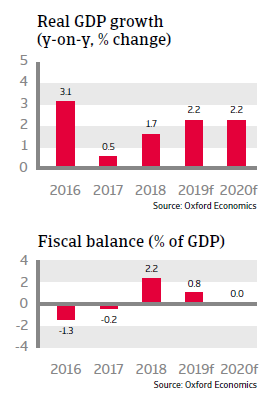 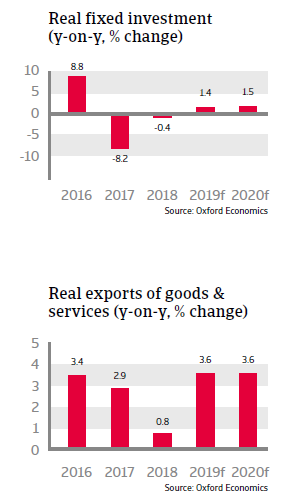 Beside deterioration of payment behaviour in the private sector, the number of payment delays in larger projects dependent on government funding is still high.

In 2019 and 2020 growth is expected to exceed 5%, supported by exchange rate liberalization, interest rate normalisation and increasing tourist arrivals.

The economy is currently forecast to expand by about 3.5% in 2020, however, this depends on decent performance in agriculture, tourism, and exports.