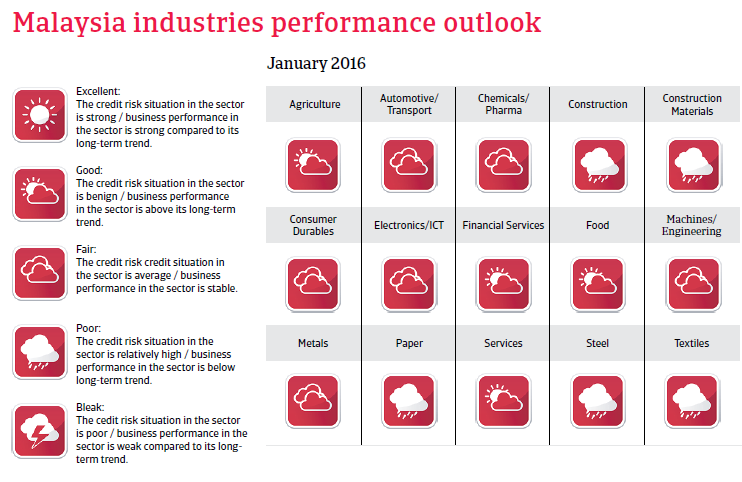 Head of state: King Tuanku Abdul Halim Mu'adzam Shah (since April 2012); the position of the king is primarily ceremonial

Form of government: The United Malays National Organization (UMNO) is the leading party in a 13-party coalition-government of National Front (Barisan Nasional, BN).

The Malaysian population is an ethnic and religious mix of Muslim Malay (50%), Buddhist Chinese (24%), Hindu Indians (7%) and indigenous people (11%). Despite its majority, the Malay population possesses only about 19% of the wealth. Racial tensions have always simmered under the surface, but have not surfaced in over 40 years, thanks mainly to a massive affirmative action policy favouring ethnic Malays. However, this policy has hindered Chinese and Indian minorities in their social and economic progress. The continuation of this so-called ‘pro-bumiputra policy’ or the possible cutback of it, is one of the major political issues.

The Barisan Nasional (BN) coalition led by the United Malays National Organisation (UMNO) has been in power since Malaya achieved independence in 1957. Despite growing electoral successes by opposition parties, UMNO remains firmly in power.

However, political tensions have increased since Prime Minister Najib Razak has been confronted with corruption allegations: government investigators found that nearly USD 700 million from a government investment fund was deposited into the prime minister’s bank account. The issue has led to street demonstrations against corruption and the dismissal of a couple of ministers, exposing severe wrangling within the administration and the UMNO party.

Externally, the traditionally strained relations with neighbouring Singapore have improved significantly over the last few years, with increased cooperation between the two countries in business development and tourism. Gradual economic integration is expected to continue. 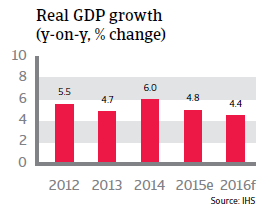 Malaysia´s economic growth is expected to slow down to 4.8% in 2015 and 4.4% in 2016, as decreased demand from China and a lower oil price detract from export performance and eat into government revenues. GDP growth is driven by private consumption (despite rising private sector indebtedness and household debt) and high investment, partially driven by government expenditure (e.g. by accelerating public infrastructure projects).

Weak fiscal discipline and huge expenditures on fuel subsidies have led to structurally large budget deficits. Indeed, the country has not had a surplus since 1997. As any improvement in Malaysia’s credit rating and in more long-term investment is constrained by this weak fiscal position, the government cut subsidies for gasoline and diesel, followed by the introduction of a goods and services tax (GST) of 6% in April 2015 in order to decrease the economy´s reliance on oil revenues. 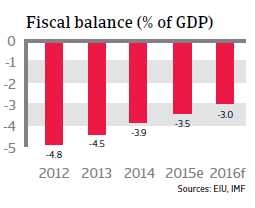 The Malaysian ringgit has sharply depreciated in 2015 due to the slump in commodity prices and as the political fall-out from the on-going corruption scandal involving the prime minister has triggered a pull-out by foreign investors from stocks and bonds. Portfolio investment and external finance requirements in Malaysia are high compared to reserves, making the ringgit vulnerable in the current environment.

Dependence on foreign currency inflows from substantial oil and commodity exports amplifies this effect. The ringgit is now undervalued and should be expected to rise. 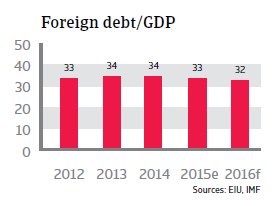 So far, the sharp currency depreciation has not led to high inflation, mainly due to low oil prices and the waning impact of the GST tax hike in H2 of 2015. The central bank left the benchmark interest rate unchanged at 3.25% since July 2014. A flexible exchange rate serves as an effective shock absorber, increasing export competitiveness.

Malaysia’s sovereign payment capacity is guaranteed by low foreign debt (32% of GDP; 38% of exports of goods and services in 2015), ample liquidity and a relatively well diversified economy. International reserves amount to more than eight months of import cover.

The slowdown in world trade: temporary or permanent?

The impact of the Chinese stock market crunch of this summer and the renminbi devaluation should not be overestimated. The main long-term risk is an accelerating economic slowdown.

Global economic growth is expected to be sluggish in 2016. Bankruptcies remain high in the eurozone and are rising in key emerging markets.