Economic expansion in the Czech Republic is forecast to remain positive over the coming months, with an average growth rate of about 3% this year.

Despite this benign outlook, downside risks remain. Primary risks include rapid exchange rate appreciation affecting international competitiveness and sharp declines in external demand. These could be triggered by increased political uncertainty, as well as by a sudden escalation of international trade disputes or an unforeseen slowdown in the Eurozone.

87.6% of the total value of Czech respondents’ B2B sales was reported to be made on credit (up from 43.3% last year). This is far above the 67.2% average for Eastern Europe, and is the second highest in the region after that recorded in Slovakia (91.5%). This is likely to be a reflection of strong growth in household consumption driven by wage growth, decreasing unemployment rates and favourable lending conditions. Moreover, exports from the Czech Republic increased markedly over the past few years, supported by the country´s improved international competitiveness. This may explain the frequent use of trade credit by Czech exporters that want to remain competitive on foreign markets.

Suppliers surveyed in the Czech Republic reported that they gave their B2B customers more time than last year to settle invoices. This relaxation of the payment timings may explain the increase in sales on credit seen earlier. Most Czech respondents (76%) granted payment terms averaging 31 days from invoicing (up from 26 days last year). This compares to a regional average of 37 days.

In line with the increased supply of trade credit and the longer time given to B2B customers to pay invoices, Czech respondents appear to have a heightened perception of trade credit risk arising from trading on credit terms. To protect their business from customers’ payment default, Czech respondents seem to focus strongly on dunning activities (outstanding invoice reminders). This is performed far more often by respondents in the Czech Republic (68%) than by those in Eastern Europe overall (39%).  Credit checks on prospective customers prior to any trade credit decision are performed by 52% of Czech respondents. This is comparatively lower than the percentage that favours the dunning approach, but far more often than by their peers in Eastern Europe overall (39% of respondents).  Interestingly, a far higher percentage of respondents in the Czech Republic (43%) than in Eastern Europe (32%) reported they request payment on cash terms from B2B customers. This finding highlights that settling payment on cash is still a very common payment method in the Czech Republic, accounting for a large proportion of B2B transactions.

Approximately one quarter of the total value of B2B invoices issued by Czech respondents over the past year remained outstanding at the due date. Despite improved payment timings from B2B customers, resulting in an average 14% increase in timely payments (74.3% of invoices paid on time compared to 65.2% one year ago), Czech respondents do not cash in overdue invoices significantly earlier than last year (40 days compared to 41 days last year). To manage potential liquidity constraints arising from late payments and alleviate the financial pressures, Czech respondents needed to pay their own suppliers late or take corrective measures to solve cash flow issues (22% of respondents). 3 in 5 respondents, however, reported no significant impact on business arising from late payments. This is consistent with Czech respondents’ sharp focus of on cash flow management seen earlier.

Most Czech respondents (73%) do not expect the payment practices of their B2B customers to change over the coming months. 12% anticipate improvement and 15% expect deterioration resulting in increased late payments and write offs of uncollectable accounts. As the banks in the Czech Republic are healthy and highly profitable, businesses do not express concern that access to bank financing might become more troublesome over the coming months. However, should the Czech Republic become vulnerable to external shocks, caused for example by escalating trade wars adversely impacting export trade flows, Czech respondents would offset operational cost increases with a significant reduction of their investments in business growth. 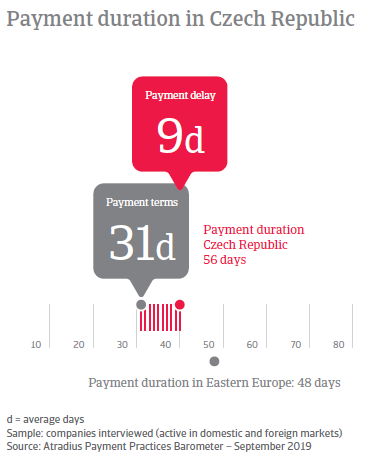 Overview of payment practices in the Czech Republic

Contrary to what was observed across all the industries surveyed in the Czech Republic, payment terms granted to B2B customers in the machines sector are much shorter than last year (averaging 32 days down from 44 days last year). Respondents in the agri-food sector set the shortest average payment terms (22 days), which remained stable compared to one year ago.

Trade credit risk is highest in the Czech transport sector

Trade credit risk in the Czech Republic has significantly worsened in the transport sector, where 36.8% of the total value of B2B invoices remained unpaid at the due date. Over the past year, the most significant improvements in the speed of payments from B2B customers was observed in both the chemicals and the consumer durables sectors. Payment practices of B2B customers in the Czech agri-food sector remained substantially unchanged.

Proportion of uncollectable receivables is highest in the consumer durables sector

The consumer durables sector in the Czech Republic recorded the highest proportion of B2B receivables written off as uncollectable (2.6%). The consumer durables and chemicals sectors followed at 2.2%. The machines and agri-food sectors can be found at the lower end of the scale, with the proportion of receivables written off as uncollectable recorded as an average of 1.4% and 1.1% respectively. 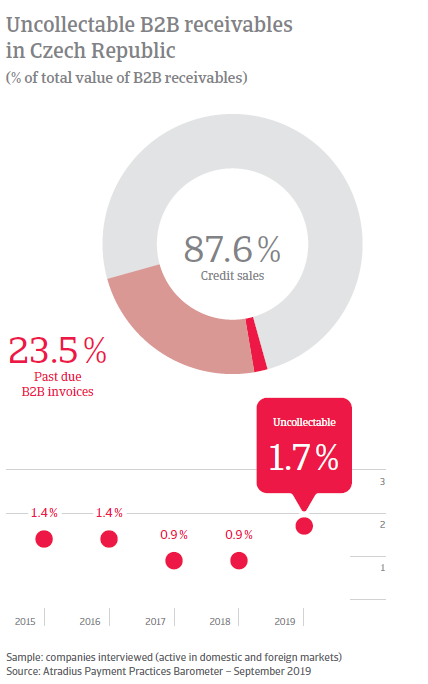 Large enterprises the slowest to turn overdue invoices into cash

Over the past year, large enterprises in the Czech Republic recorded the highest increase in late payments (+12% on average). Due to this variation, overdue invoices in large enterprises now account for 31.8% of the total value of B2B invoices. Because of this deterioration, large Czech enterprises are now the slowest to collect payment of invoices (45 days compared to 40 last year). Over the past year, average payment duration improved for both Czech SMEs and micro enterprises. These latter now collect payment on average 3 days faster than one year ago.  In contrast, it takes SMEs almost the same time as last year to cash in overdue payments (44 days compared to 43 one year ago).

Economic growth in Eastern Europe is projected to remain solid this year, despite losing steam mainly because of poor growth prospects for Turkey.

Trade successfully with the Czech Republic

Payments in the Czech machinery sector take around 40 days, with ‘days sales outstanding’ (DSO) for smaller businesses of about 50 days.