After several years of annual decreases, German business insolvencies are expected to increase again in 2019 as the economic expansion slows down. 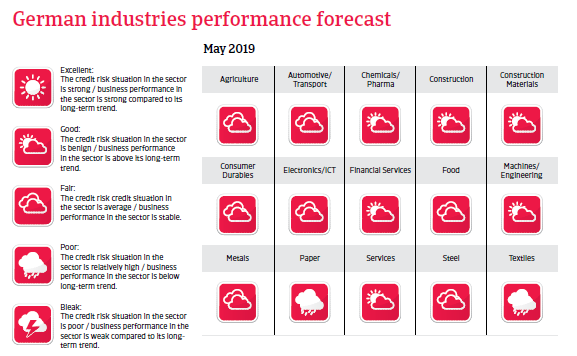 Insolvencies expected to increase after nine years of annual decreases

Germany’s consistent economic performance since 2010 resulted in annual decreases in business failures. In 2018 business failures decreased again, by 3.9%, to about 19,300 cases. However, a 2% rise is expected in 2019 as Germany´s GDP growth is forecast to slow down. 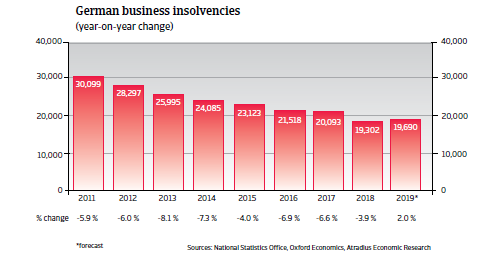 The economic expansion slows down

Economic expansion should slow down in 2019 as external demand is decreasing while global trade uncertainty has increased, having a dampening effect on export growth, manufacturing orders and industrial production.

A rebound is expected in 2020, but a marked slowdown in world trade and the potential imposition of US import tariffs on cars and car parts pose a downside risk for the German economy.

The federal government has achieved slight budget surpluses since 2015, largely due to higher tax revenues and lower government transfer payments for unemployment. In 2019 and in 2020 the budget surplus is expected to be maintained.

Many smaller construction companies have weak equity ratios and limited financial scope, which makes them vulnerable to payment delays and defaults.

Western Europe: an increase in past due B2B invoices

After a minor increase from 2016 to 2017, the proportion of past due B2B receivables in Western Europe increased again this year and stands at 41.8%.

Of the Western European countries surveyed, Germany had the second highest percentage of respondents (24.7%) who reported revenue loss due to overdues.