Mexico's recovery in 2021 will be modest, with GDP returning to its pre-pandemic level in 2024 at the earliest among several downside risks 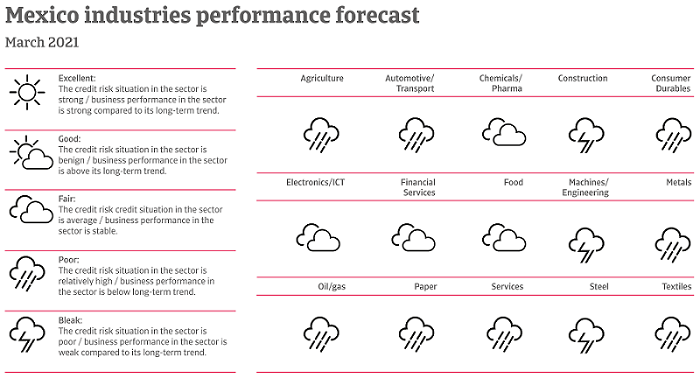 Concerns over health and economic policies have increased

President Andrés Manuel López Obrador of the leftist Morena party governs with a strong political mandate, as a Morena-led coalition has a large majority in both houses of Congress. However, due to the severe spread of the coronavirus pandemic and as a result of the economic downturn, the handling of the crisis by the government has drawn severe criticism. Compared to most other countries in the region, Mexico took less stringent measures on a national level to contain the spread of the disease.

While López Obrador’s popularity has subsequently dropped, approval rates remain high, at about 60%. This is due to some popular measures taken since his inauguration in December 2018, such as raising the minimum wage, reducing government salaries (including his own) and advancements in several high-profile corruption cases.

At the same time, concerns about the President’s economic policy direction remain. Doubts over the enforcement of contracts have increased, especially after the decision to cancel Mexico City’s new airport plans, following a controversial public opinion poll. The government has also reversed landmark energy reforms. Oil auctions were suspended amid other moves to reassert the dominance of the state-owned oil company Pemex.

High crime rates and endemic corruption continue to undermine the business environment and state functions in Mexico. The economic repercussion of the coronavirus pandemic particularly hit workers in the informal sector, who amount to about 60% of the total labour force. As a consequence, rising poverty could become a social and political issue.

Mexico’s economic performance deteriorated steeply in 2020 due to the coronavirus pandemic. GDP contracted 8.7%, mainly due to steep declines in consumption and investment. The coronavirus pandemic exacerbated an already weak economic situation, with Mexico entering 2020 in a mild recession, due to fiscal tightening and falling investments on the back of rising policy uncertainty.

Mexico’s high vulnerability to the effects from the pandemic stem from its relatively weak healthcare system, the close synchronisation of its economy with the US business cycle (making it more susceptible to external shocks) and its relatively high dependence on the services sector (including tourism). The automobile sector, Mexico’s leading source of exports, suffered from a sharp fall in external demand and severe supply chain disruptions.

In order to mitigate the economic impact of coronavirus, the central bank cut interest rates several times in 2020, to a still relatively high 4% in February 2021. Additionally, it took measures to support credit lines for consumers and SMEs. The fiscal policy support has been very limited so far, at just 1% of GDP, as the government remains committed to fiscal discipline for the time being. This is despite a sustainable government debt rate  of 47% of GDP in 2019. In the absence of comprehensive government support, some states and the private sector have stepped into the void. States have offered to suspend tax payments for businesses and, together with the Inter-American Development Bank (IDB), the Mexican Business Council launched a loan scheme for SMEs.

Only a protracted recovery expected

Due to the meagre fiscal support and comparatively tighter monetary policy, the recovery will be protracted, and GDP will only return to its pre-pandemic level in 2024. Other issues are persisting economic policy uncertainty and concerns about contract enforcement and rule of law under the current government, which will continue to have a negative impact on business confidence and private investments.

In 2021 GDP is forecast to partially rebound, increasing by 5.6%. Exports of the manufacturing sector should receive a boost from higher US growth prospects, while an infrastructure plan will contribute to a partial recovery of investment. However, this recovery expectation remains subject to a timely containment of the second wave of the pandemic and the roll-out of vaccination. Inflation will remain at the upper end of the Central Bank’s 2%-4% target range, mainly due to higher fuel prices and shortages due to supply-side disruptions.

After increasing from 47% of GDP in 2020 to 57% of GDP in 2021 due to the repercussions of an economic contraction, the government debt ratio is expected to level off in 2022.

The government debt structure is generally favourable (70% in local currency). The main vulnerability is a relatively high share of debt held by non-residents (45%), but refinancing risks are mitigated by a favourable maturity structure (average maturity of more than 18 years for external debt), and prudent debt management. The vulnerability to oil price declines has been mitigated by fiscal reform and an oil price hedge.

The main risk for government finances remains the contingent liability related to heavily indebted state-oil company Pemex (11% of GDP). The financial situation at Pemex has become more uncertain following the shift from exploration to loss-making refining. Due to the company’s net losses, financial debt increased further in 2020. President López Obrador has prioritized supporting state-owned energy companies financially over further liberalising the market. In December 2020, he announced the spending of another USD 24 billion in order to support Pemex and its refineries.

The peso exchange rate against the USD sharply depreciated in March 2020 due to high capital outflows and the deterioration of the oil price. However, it appreciated again since May, and by the end of 2020, it had almost recovered its lost ground. While the exchange rate will remain volatile in 2021, it is expected to continue its appreciating trend, supported by a global recovery in manufacturing. Exchange rate fluctuations serve as a shock absorber for the economy, helped by two factors: the fact that Mexico’s foreign currency debt held by the public and private sector remains limited, and by exchange rate hedging. A healthy banking system and solid external balances underpin shock resistance for the time being.

The current account surplus seen in 2020 will narrow in 2021 and beyond, as import demand surges again. Foreign direct investment inflows are impacted by less business-friendly policies, averaging 1.6% of GDP annually in 2020-2024 (down from 2.3% of GDP in 2015-2019). External debt ratios at 45% of GDP and 100% of exports and goods and services remain relatively low and sustainable this year (share in total: sovereign 45%, corporates 47%, banks 8%). The debt service ratio remains low, reflecting the lengthening of maturities by both the government and corporates. Natural and financial hedges mitigate the currency risk.

The international liquidity position is adequate, with abundant official reserves (more than five months of imports, abundant enough to cover 2021 external refinancing needs). Reserves are underpinned by a precautionary IMF Flexible Credit Line of USD 61 billion (extended in November 2019 for another two years), and a USD 60 billion swap line with the US Federal Reserve. This reduces transfer and convertibility risks. Access to capital markets remains solid, which is reflected in several international bond issues last year and by the sovereign and the private sector in early 2021.

As several vaccines have been approved and are being rolled out, we expect the global economy to rebound in 2021